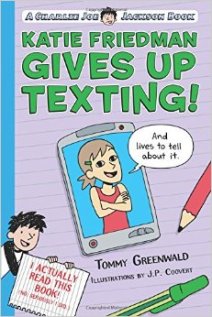 Katie Friedman’s favorite singer is Jane Plantero from the band Plain Jane. Her boyfriend, Nareem, scores tickets to a Plain Jane concert just as she is about to break up with him. She goes to the concert and meets Jane, and later accidentally texts Nareem that she doesn’t like him anymore. That is when she decides to give up her entire cell phone for a week along with ten friends in exchange for Jane signing an original song by Katie herself. Can Katie and her friends last a whole week without their cell phones? Read Katie Feldman Gives Up Texting (And Lives to Tell About It) to find out!