Alex Morgan is a soccer superstar and a role model for girls and soccer lovers of all ages. Her life and soccer career are chronicled in this biography about her in the Epic Athletes series by Dan Wetzel. Young Alex Morgan fans will love this book, and will be eager to read the rest of the series as well. 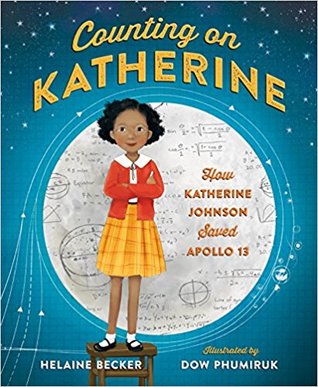 Counting on Katherine by Helaine Becker is a biography about Katherine Johnson, the mathematician who calculated the flight path for NASA’s first moon landing in 1969. The book starts out by telling readers about Katherine’s childhood and her lifelong love of math. It then goes on to explain how she became a mathematician when she grew up, and how she saved Apollo 13.

Fans of Beatrix Potter and her adorable Peter Cottontail stories will love this biography! It describes what happens in the stories that she wrote and illustrated. The book chronicles Potter’s life, and tells of how she came to create the beloved tales.

Wisler chronicles Hamilton’s life by taking lessons and advice that we can learn from everything he did and the way he lived his own life. Hamilton was a scrappy orphan who had an insatiable hunger for learning. He read everything he could get his hands on, and then he wrote as much as he could. Helping win the Revolutionary War, ratifying the Constitution and creating the country’s financial system were just some of the things that Alexander Hamilton accomplished. Wisler explains Hamilton’s basic maxims, as Hamilton liked to say, for anyone who wants success in money, romance or a good fight. Hamilton was a man before his time, and people of all generations will learn from him for years to come.

This biography explains, in simple terms, what exactly Buffalo Bill Cody did in his day. The author explains both what Buffalo Bill said about himself as well as what is known about him historically. The book is filled with photos, memorabilia from shows and drawings to illustrate Cody’s shows.

Vivien Leigh is perhaps most famous for her portrayal of Scarlett O’Hara in the movie adaptation of Margaret Mitchell’s Gone With the Wind. She was an actress who found herself in her roles. She immersed herself so much into them that she began to take on the characteristics of the person she was depicting on the silver screen. The book is based on interviews of Leigh’s family, friends, colleagues and Leigh herself.

It is said that Gone With the Wind by Margaret Mitchell is semi-autobiographical, and that she based its main character, Scarlett O’Hara on herself. Road To Tara chronicles the life of Margaret, called Peggy by her close friends and family. Readers learn about her private life and how the legendary novel came to be. Lovers of Gone With the Wind will eat this one up!

This is a biography about Jill Kinmont, an Olympic hopeful whose dreams are squashed when a skiing accident renders her a quadriplegic. It tells of her courage and journey to learn things from the beginning again after her tragic accident.

Melissa Rivers does a fantastic job of portraying her mother’s wit and spunk in this hilarious biography. From insightful advice about dating to life rules to follow in general, Joan Rivers’s life and legacy are lovingly portrayed through the various stories told by her daughter. Joan was an unforgettable personality and she will no doubt be remembered for years and years to come.

Thanks to BloggingForBooks.com for a review copy of this book.